Sigiriya, Polonnaruwa, Anuradhapura and much more…

Things not to miss while you travel through the Cultural Triangle of Sri Lanka.

The dry, flat area northeast of the Hill Country, bounded by Dambulla, Anuradhapura and Polonnaruwa, is known as the Cultural Triangle.

The region covers Sri Lanka’s most famous cultural and archaeological sites – some dating back 2.500 years and containing the remains of the Sinhalese civilisation, which grew through the centuries under the influence of Buddhism. At the heart of this triangle is Dambulla, perhaps the best base for exploring the sites, along with Habarana, which offers a wide range of accommodation options. To the south, Kandy is also a possible starting point for exploring this region, with lots of places to stay.

DO NOT MISS IN THE CULTURAL TRIANGLE OF SRI LANKA:

1. Anuradhapura, one of the ancient capitals of Sri Lanka

Anuradhapura is one of the ancient capitals of Sri Lanka, world famous for its well preserved ruins of the Great Sri Lankan Civilization. The Civilisation which was built upon this city was one of the greatest of Asia and in the world. The city is now a UNESCO heritage site. Founded in the 4th century BC, it was the capital of the Anuradhapura Kingdom until the beginning of the 11th century AD. During this period it remained one of the most stable and durable centres of political power and urban life in South Asia. It was also a wealthy city, which created a unique culture and a great civilisation. Today this ancient city of Sri Lanka, which is sacred to the Buddhist world, with its surrounding monasteries covers an area of over sixteen square miles (40 sq km) and is one of the world’s major archaeological sites.

Mihintale is named as Mahindha’s hill in Sinhalese. It is a 1000 feet high mountain range. Very explorative climb to witness an excellent view from the rock, Mihintale was the place where Buddhism was originated for Sri Lankans. It happened in 247 BC, when King Devanam Piyatissa was converted by Mahinda, the son of Buddhist emperor Ashoka into Buddhism.

Sites to visit in Mihintale:

The second most ancient of Sri Lanka’s kingdoms, Polonnaruwa, was first declared the capital city by King Vijayabahu I, who defeated the Chola invaders in 1070 AD to reunite the country once more under a local leader. While Vijayabahu’s victory and shifting of Kingdoms to the more strategic Polonnaruwa is considered significant, another important Polonnaruwa figure of the history books is his grandson, Parakramabahu I. In 1982, UNESCO added this ancient city to its World Heritage list.

Sites to visit in Polonnaruwa:

Do not miss also the Archaelogical Museum of Polonnaruwa, open from 9 am to 6pm. Each of its room is dedicated to a particular theme, with scale models of buildings, including the Vatadage. The Museum explains also the history of the stunning water engineering and irrigation projects that the ancient kings managed to build in this dry area of Sri Lanka.

According to the popular knowledge, the story goes that this was the fortress of King Kasyapa who ruled between AD477 and 495 and allegedly built a garden and a palace on the summit of the rock. According to this theory, King Kasyapa killed his own father (King Dathusena) by plastering him alive to the wall in order to rule his father’s throne. Then, his half brother (Moggallan) returned from India after 18 Years and – as an attempt to keep his kingdom – Kasyapa came down to battle Moggallan’s army. During the battle, Kasyapa thought his army left him. So he pulled his own dagger and slit his own throat and placed the dagger back in his case.
After Moggallan’s rule, the Palace was inhabited by monks up until 1,155 AD. Sigiriya also has some excellent views all around, that worth the climb right to the top. Sigiriya contains the ruins of an ancient palace complex. It is one of the seven World Heritage sites in Sri Lanka, declared by UNESCO in 1982 and is one of its most popular tourist destinations.

Do not miss the Sigiriya Museum, open from 8.30 am to 5.30pm, included in the Sigiriya Entry Fee. This museum shows displays and models and it is an excellent introduction to the site: we recommend to visit it before climbing the rock. 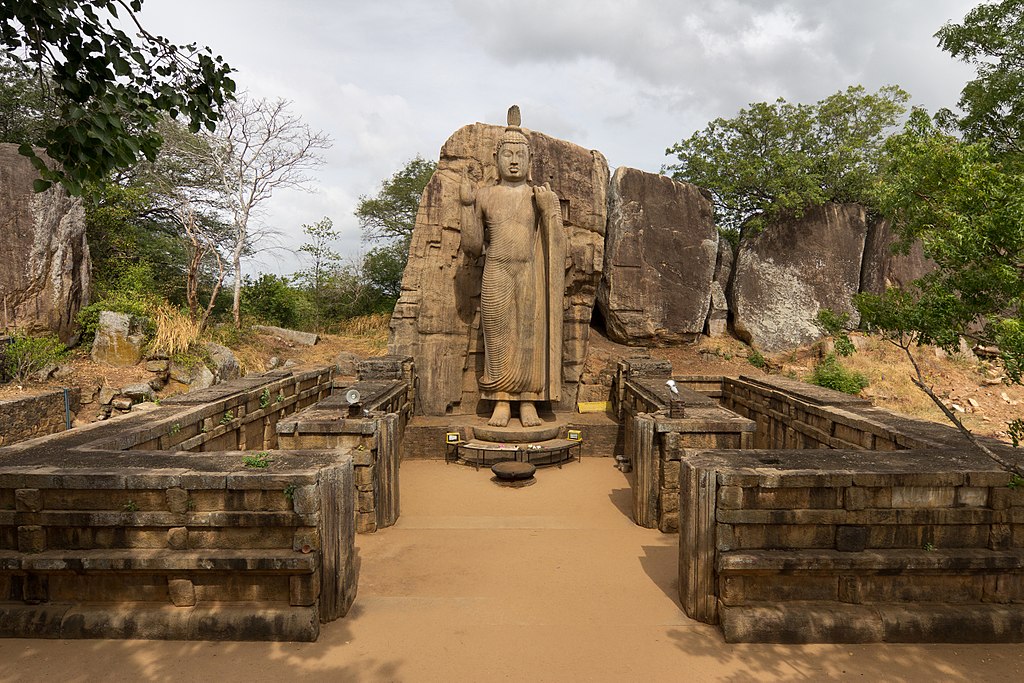 Ritigala is a widespread monastic and cave compound. There are many stories about Ritigala. Monks found Ritigala as a hide-­‐away place away from the world. There are more than 70 caves that have been discovered. Hanuman (the Monkey King) jumped from this spot to India, to tell Rama that Sita was held by the King of Lanka. The Mythical story tells that Hanuman dropped some Himalayan herbs on his way back from Rama’s brother over Ritigala. According to the popular belief, there are many healing herbs still to be found in Ritigala.

Aukana is one of the top elegant statues in Sri Lanka that is carved from a single rock. It is a 12m High Statue, which was sculpted in the 5 th Century AD; some say it was built during the 12th or 13th Century AD. The gesture of Buddha here is Ashiva Mudraya and signifies blessings. The fire above his head represents the power of total enlightenment.

The Dambulla Caves were a place of refuge for King Valagambahu, when he was driven out from Anuradhapura for 14 years. However, after he regained his kingship in
Anuradhapura, he turned the caves into a fabulous cave temple. Further improvements were done during the 11th, 12th and 13th Century. There are 5 separate caves, which have 150 Buddha Images.

TIP: Start from the farthest cave from the entrance and progress towards the first. The impact and crescendo of its art and carvings will leave you speechless!

Contact us for a tailor made experience in Sri Lanka. We will make a tour that suits 100% your needs.

RENT A VILLA IN SRI LANKA

SKI CHALETS IN THE ALPS

To receive our deals - We promise: we won't spam!